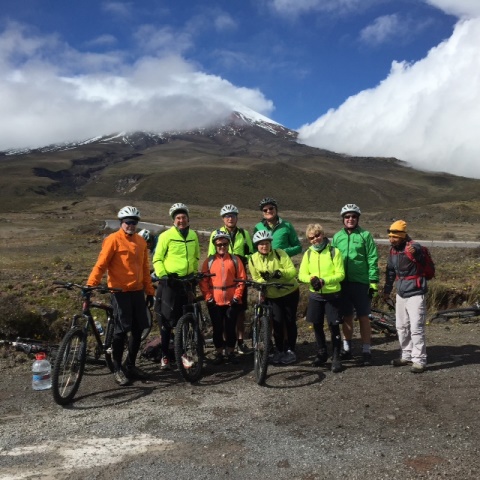 Cycle Tour of Ecuador and Colombia

Biking through South America seems a daunting prospect to many, cyclists included. New Zealanders, Gary and Fran Tate have made it seem easy with their guided bike tours in South America.  Friends of The Private Travel Company, Marilyn and David Allard have joined the Tate’s on their newest tour, Cycling Ecuador and Colombia.  They are sharing their journey with us so click here and read what they have been up to and we’ll update their journey as they go. 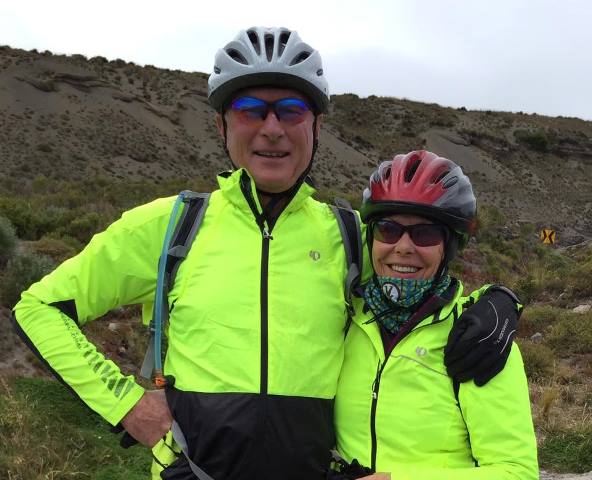 After flying into Guayaquil, Ecuador they arrived safely in Cuenca.

David says, “We arrived safely at our quaint lodgings in Cuenca and enjoyed an amazing meal out at a local restaurant. Next morning we were up early, breakfasted and drove in our van to a pass leading through the divide to the east and greater South America. As we ascended we climbed into the cloud base and visibility reduced to fog. We cycled the last 5k to the summit. This was easier to say than do as we were now above 3000m and oxygen was in short supply. After passing the summit we descended for 37k interspersed with a few shortish (3k) climbs and ended up at about 1800m in the warm sunshine sharing a beer outside a roadside stall.

We then retraced our steps (by van) to Cuenca and enjoyed a meal in the middle of all of the Corpus Christi festivities.

Waking up at the crack of dawn and we drove 4 hours through the misty countryside to the Devils Nose Railway.  We enjoyed a couple of fantastic downhill (and a little uphill) rides while we waited for our train ride. (Marilyn is setting the standard for downhill speed.)The train ride was spectacular.

Tomorrow we will head up to 4000m on Ecuador's highest peak where we plan to ride the loop which is a mixture of climbs and longer descents. It's amazing to me that people here drive around in huge trucks at 10500ft and more with no special kit, whereas a pilot would have to be on oxygen above 10.000!” (David is an Air New Zealand Pilot)

David continues, “The next day we are up early and away to Mount Chimborazo, whilst only 6268m is, due to the earth's bulging at the equator, the highest point on the planet. We drove up to 4300m where the landscape became very moonlike. Vicuña live up here, they are a llama like creature related to the camel. They must have lungs the size of an elephant to get enough oxygen to run around the way that they do.

We then descended to about 4000m, unloaded the bikes and enjoyed an amazing descent to 2500m as we followed a stream that became a river canyon. It was very cold at the top and raining for most of the way, but the ride was exhilarating.

The next day our departure plan was disrupted by the discovery that a large slip had taken out the road that was going to treat us to a fast descent alongside the river. We drove to the beginning of the ‘Route of Waterfalls’ then followed the now swollen river along a busy highway stopping at a number of spectacular waterfalls. It was a bit freaky sharing one of the tunnels on the way with the Lorries but there were bypasses for the others. At the end of the trail we clambered about 50m (vertically) down to the river where we enjoyed a very pleasant lunch. We climbed up to the Machay waterfall and by creeping on hands and knees through a crevice in the cliff we were able to get behind the falling torrent.

Then we headed to the city of Quito, back to the hustle and bustle of city life. The plan is to take a tour of the city, and then a ride on the telegenic, a gondola running from the edge of the city up the Pichinvha Volcano.

We left Quito via the Tumbaco bike trail which has been built on a defunct railway line. It is very popular with the locals but on a Friday we had only to contend with a few other bikers, although lots of dog walkers. We descended into the Chiche canyon and then climbed out through a number of tunnels finishing the trail after 27K where we met our van.

We drove to the Quitsato museum, built exactly on the equator. The guide explained how the Incas had measured the movement of the sun and marked the equinoxes. These Solar events have been pragmatically incorporated into the Catholic Church religious Calendar and we have cycled through many villages where the preparations for Equinox on June 21 are under way.

After a short drive we cycled down another disused railway line for about 20k. This one was different from the last as the track and sleepers were still in place and often exposed. A bit more concentration was required to safely navigate but pretty hard on the nether regions. We travelled through a number of villages on the way down, mostly very poor. The children sometimes came and ran alongside us. Dogs and sheep were sometimes an issue.  Fortunately the dogs seem to prefer pink or pastels when deciding which rider to harass.

Our accommodation for the next 2 nights is the Hacienda Chorlavi which is very old and quite grand.

Saturday morning we travelled in our van to Zuleta. Major roadworks meant much off route travel and at one stage Luis had to do a 50 point turn to get out of a dead end. We finally stopped about 3k short of the summit (3000m). At that altitude it's quite a challenge to ride up a steep gradient and I think that even the Iron Men amongst us (2) had to stop to catch breath. We were treated to an exhilarating high speed descent followed by a series of cobbled and unpaved roads up hill and down as we made our way around the mountain.

Saturday is market day and naturally the shoppers amongst us were keen to immerse themselves in the tightly packed stalls.

Tomorrow we will start our ride from Pablo Arenas……………