Kerry Graham spent 2 weeks in Namibia courtesy of World Journeys, one of our preferred suppliers.  She was taken on Safari to a selection of the best camps in Namibia, where you find a wildlife lover and photographers dream. While she was on her adventure, and where it was possible, she managed to report through our Facebook and Instagram pages her amazing experiences.  For those who missed those reports here they are, along with a selection of her amazing photos. 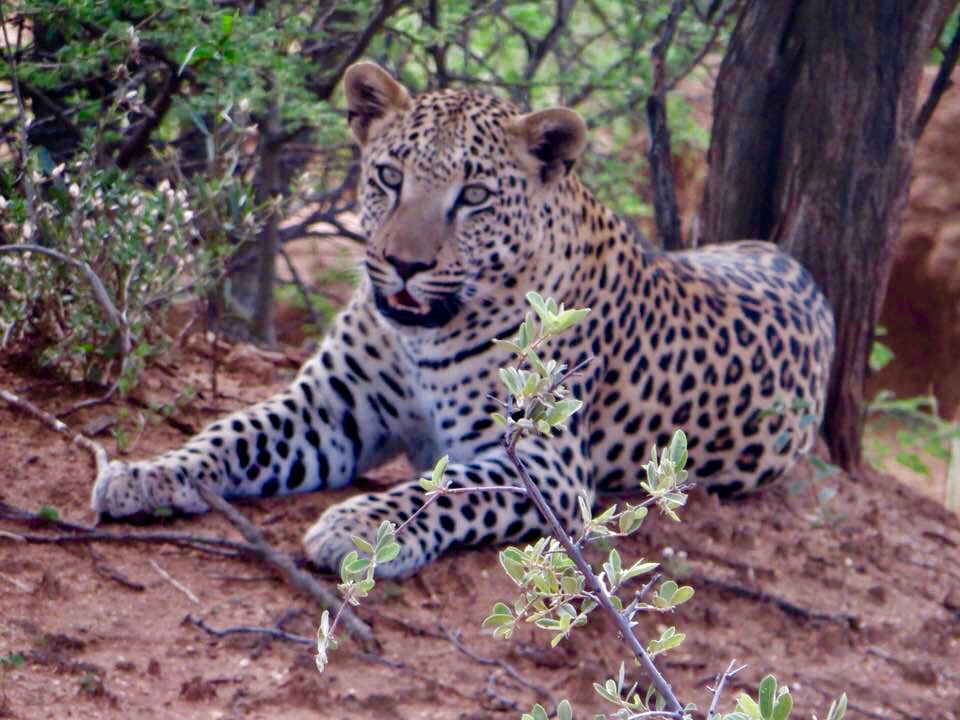 “I am in Namibia! A vast country even by African standards, covering an area around four times the size of the UK but with a population of only 2 million. One of the lowest densities in the world. On arrival in Windhoek we were met by our fabulous guide Johann and drove to Okonjima. A luxury lodge and home to the AfriCat Foundation, a wildlife sanctuary focusing on the research and rehabilitation of Africa’s big cats, especially Leopard and Cheetah. 94% of the foundations funding comes from the lodge and there are some unique activities on offer here. As well as regular game drives you can track Leopards, walking safaris to track Cheetah and a night time hide. Around 13 of the resident 40 Leopards have collars to assist in the tracking and research. Even with a collar seeing them is not a certainty. We tracked a female which lead us to her two sons. One playing with a carcass, the other just waiting his turn. Although we could hear the beep of mum’s tracker we did not see her - even thought she was right there in the undergrowth! A night time drive to the hide we spotted a Giraffe, Rhino and then witnessed a Porcupine and a Brown Hyena eating together, the Hyena giving the quills a healthy respect. The next morning, we set off on a walking safari to find Cheetah. Again, the tracker indicated they were close by. We were on top of them before we knew it. As young they were rescued and rehabilitated, but certainly not tamed. To be within a few feet of such beautiful animals was a privilege. They pretty much ignored us.
A great start to our trip.” 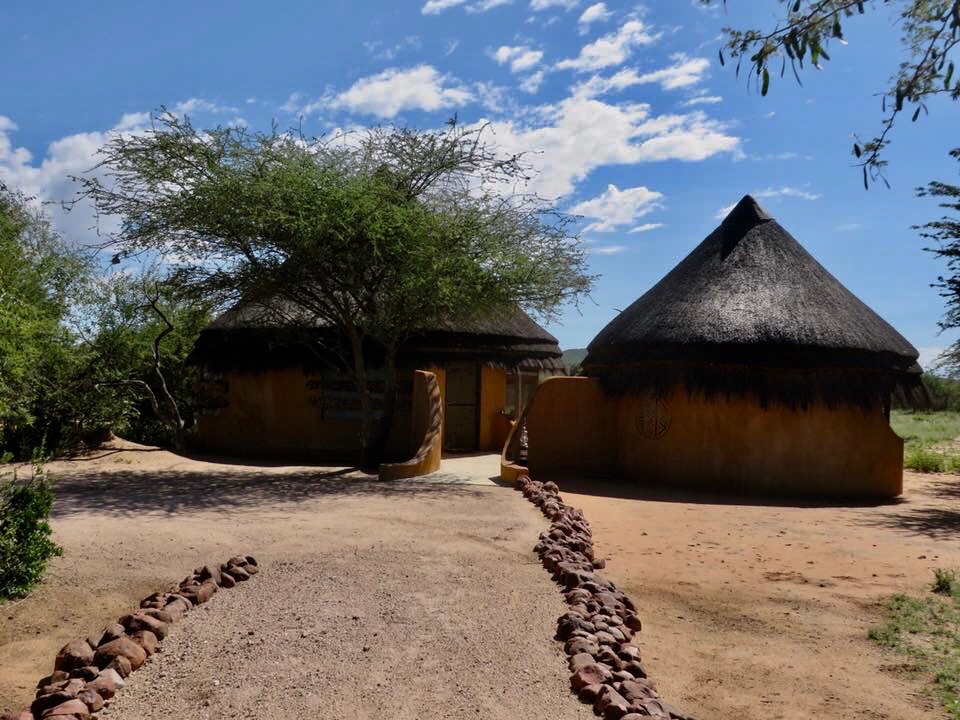 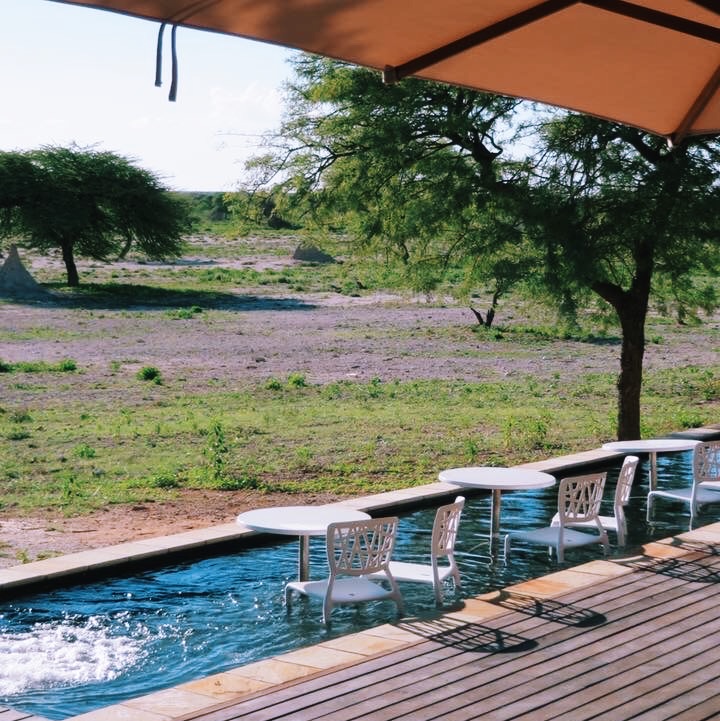 “Our second night was spent at Onguma-The Fort. Moroccan in style it was very unexpected but sat very comfortably in the landscape. With a large spot lit waterhole and wonderful sunsets. There was a chorus of ‘ooohs’ and ‘wows’ on arrival.
Onguma is located on the Eastern side of Etosha National Park with a common boundary. It has more than 20,000 hectares of land with all the predators and wildlife, including a family of black rhino. Amazing to be having a sherry on the private viewing deck and seeing a lioness and cub wandering back from the waterhole. Sorry about the picture quality. 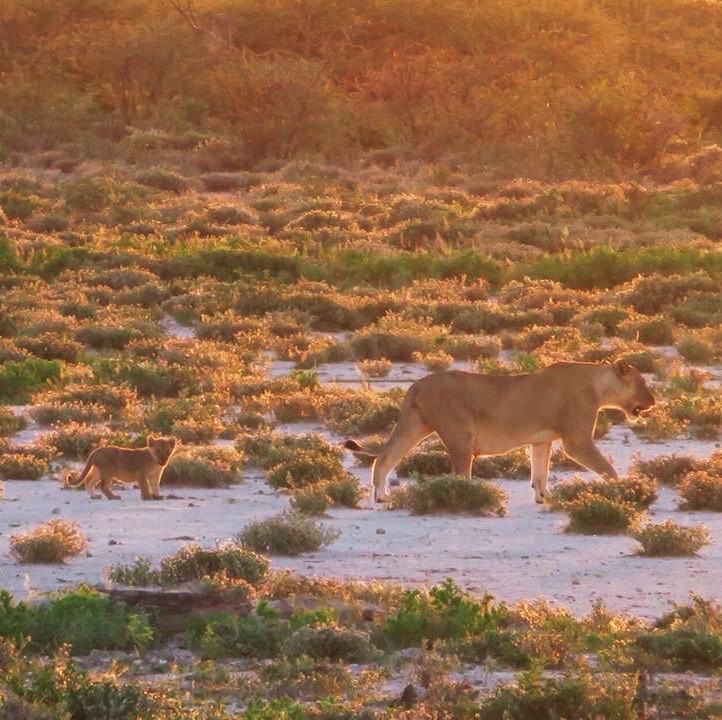 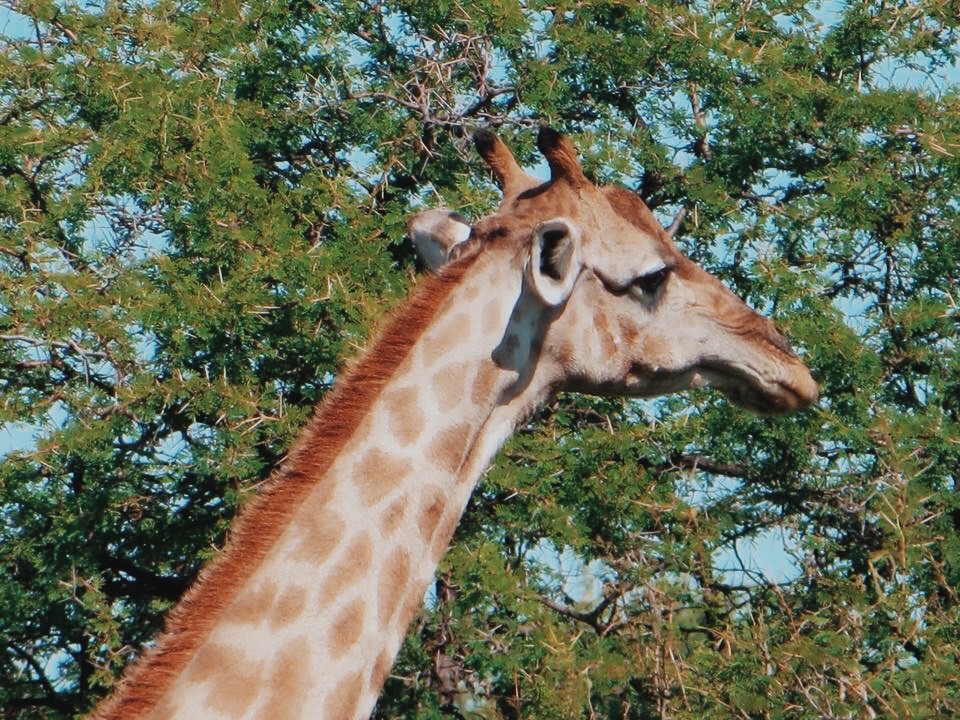 “From Okonjima Lodge we entered the Etosha National Park on the Eastern side and spent the day travelling across the park to Andersons Gate on the Southern Side.
Etosha covers 22,270 sq. km of which almost a quarter is made up of saline depressions or ‘pans’. The largest, Etosha Pan is on the NW edge of the Namibian Kalahari Desert and can be classified as a saline desert. Until 3 million years ago it formed a large shallow lake, that drained when the major river changed course and flowed to the Atlantic. If it still existed today it would be the third largest lake in the world. Etosha hosts some 114 mammals and over 340 bird species.
Our home for the night was Ongava Lodge, a private game reserve bordering Etosha. Perched on a ridge with endless views across the plains, with a small but very active waterhole. There is an enclosed walkway, so you can view from the deck or walk down the hillside in safety to the hide.
We saw ‘Ghost’ Elephant, white from the Etosha sands, wildebeest, eland, kudu, gemsbok, zebra in the Park and the highlight being 5 Rhino both black and white together at the waterhole. Also, lions, one with her cubs.” 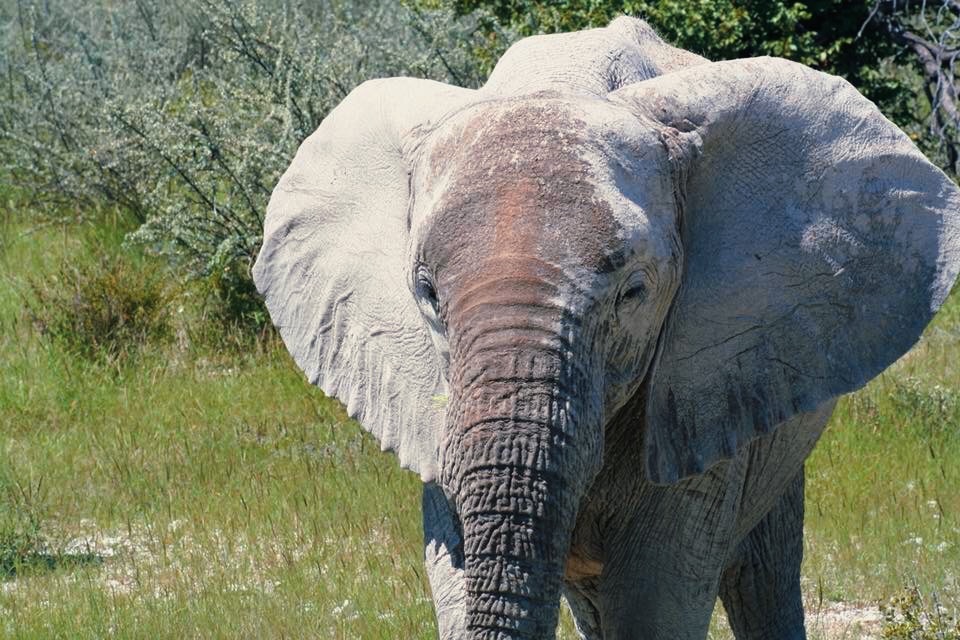 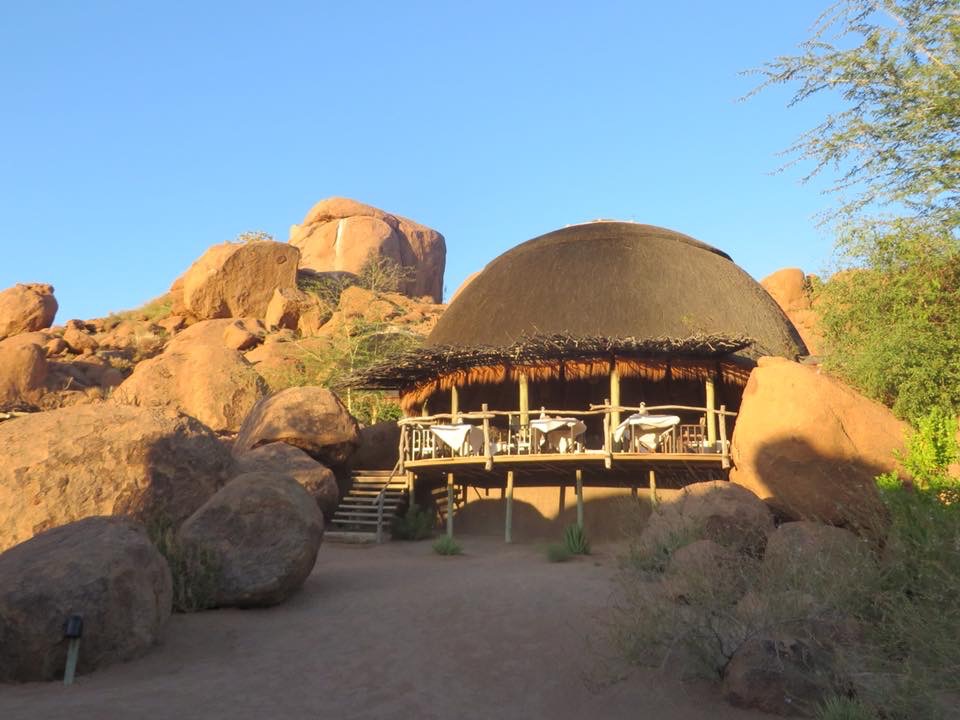 Woken this morning by the sounds of a lion roaring. How cool is that! Then off after an early breakfast to Camp Kipwe in Damaraland. Magnificent table top mountains, rock formations and bizarre vegetation. The camp is hidden among the rocks and there’s no sign of it - until suddenly there it is!.
Felt like Wilma Flintstone in my spacious cave like room with outdoor bathroom. Incredible architecture. Probably the best sunset after a climb to the lookout with 360-degree views over the surrounding landscape.
This camp is situated at Twyfelfontein, home to people from the earliest times and recently declared a UNESCO World Heritage Site. An afternoon visit to walk amongst the engravings - too hot to be out and about at over 40 degrees - but well worth seeing. Exposed to the elements they are being eroded by wind and the occasional rain. Discussions are underway as to how to best preserve them.” 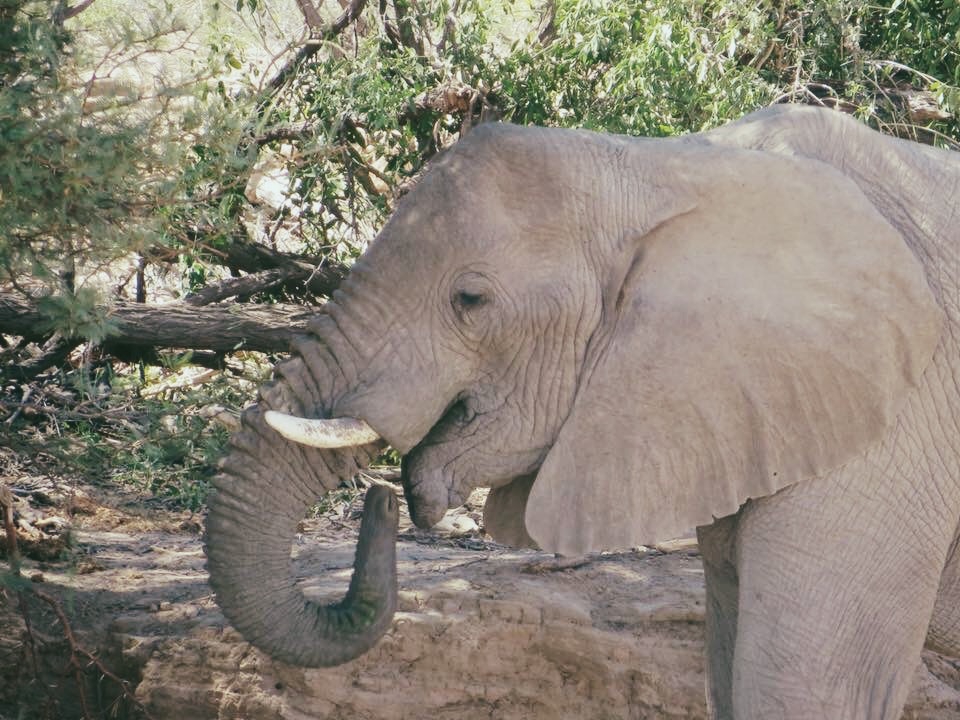 Damaraland is home to several desert adapted animals. One being desert Elephant and other large animals such as Black Rhino and Giraffe. In Namibia you will not see the vast herds or numbers of wildlife that you will in East Africa as the areas are huge and more sparsely populated. We set off to track the desert Elephant enroute to our next camp and were lucky enough to find a family group in a dry river bed. These elephants walk further for food and water than any other elephant in Africa. The distance between food and water holes can be as great as 68 km. Not surprisingly they are thinner than those that live in more lush areas and they appear taller due to skinnier legs. After a picnic lunch we popped in to visit our guides ‘Auntie’ who kindly showed us her kitchen. Separate from the main house due to fire risk she was baking when we arrived, over a fire. She and her husband were delightful. Then on to Damaraland camp. Cabins in the rocks, but with a pool. Very welcome on another scorching day as we arrive very hot and dusty. 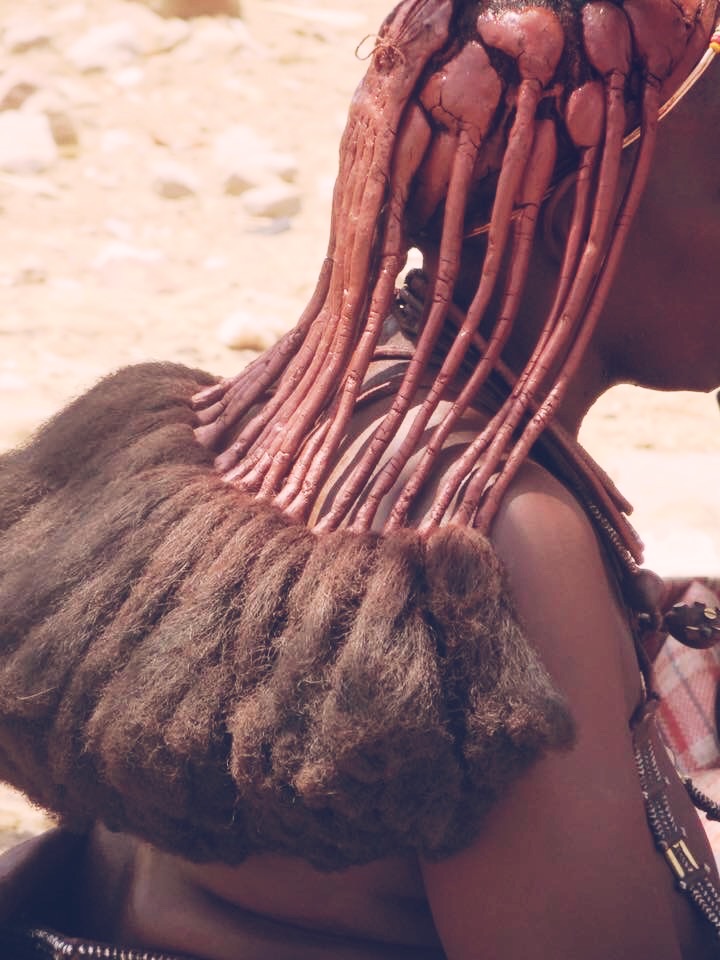 Still in Damaraland land and off to visit the Himba. There are two main people in this area, the Himba and the Damaraland people. We visited the Himba in a remote village living as they have done for generations in mud and dung huts. The women rub their bodies with red ochre and fat, a treatment that protects their skin from the harsh desert environment. Amazing hair!! They are semi nomadic and were very open to our questions on all aspects of their lives. The kids were great and enjoyed having a European boy to interact with. The drive continued over true 4WD terrain over a pass to the Huab under canvas. The drive was nail biting stuff and the camp a welcome site. Bucket showers in open air bathrooms with spacious tents. Camp beds and foam topper mattresses. Luxury Glamping at its best. A personal favourite!!” 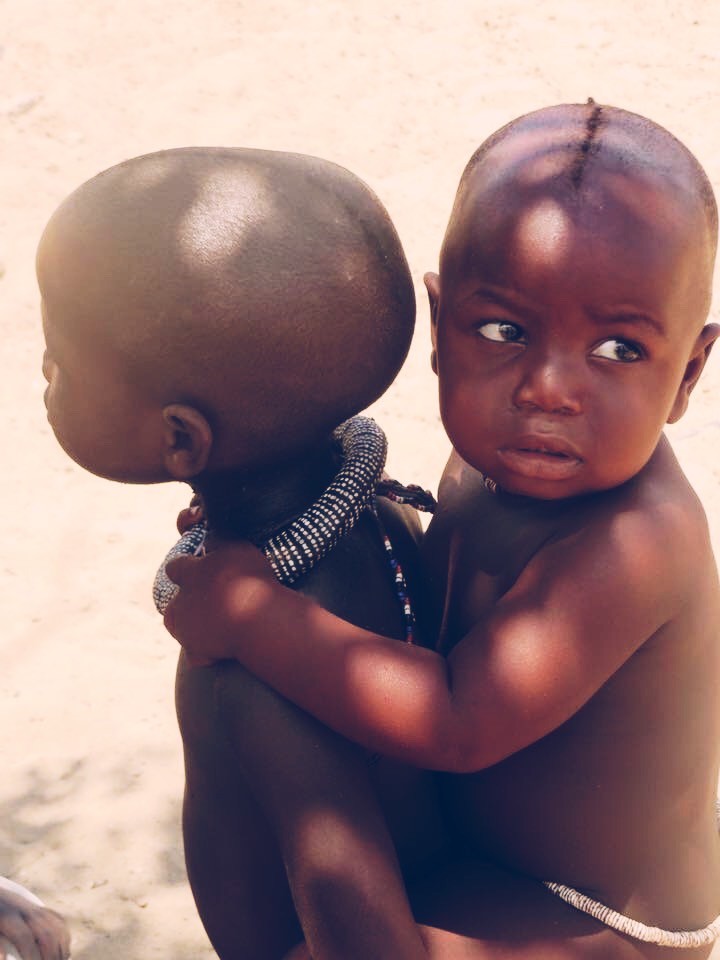 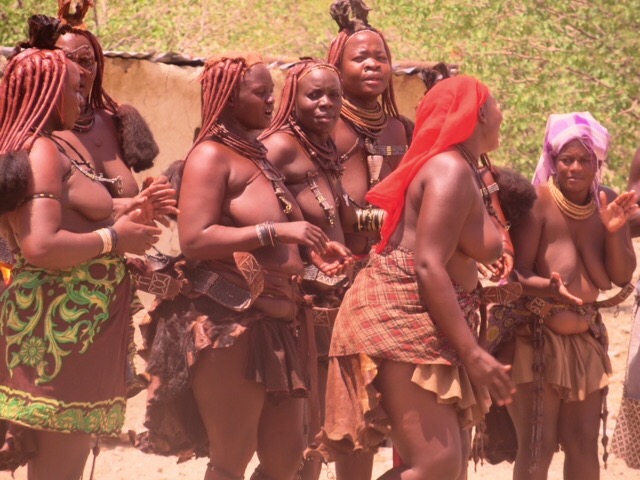 Huab Under Canvas is a remote camp owned by Ultimate Safaris Namibia, the company responsible for our trip throughout Namibia. It’s a sole use camp, meaning you will be the only people there. There are 8 tents, two are family tents. The difference being a larger deck where a tent can be pitched for children. What a great experience for them. This is a place for couples, or groups of friends or extended families. One of the few places you can visit the Himba, track desert Elephant and Rhino. You can also opt for a night under the stars where a campsite will be set up for you in a dried riverbed. After dinner your guide will leave you and come back in the morning - or bunk down nearby if you prefer! You can also choose an overnight hike, where you walk in the cool of the day and rest in hammocks during the heat., After breakfast we set off to track, Rhino. Trackers from Save the Rhino left early in the morning to visit waterholes to pick up the tracks. Once they had found the animals we followed in the truck until the Rhinos slowed to rest in the growing heat. We then left the relative safety of the vehicle and followed on foot stopping about 150 metres away. The Rhino knew we were there, but were relaxed. Sometimes they will run off, or they may come to investigate! They can cover 100m in around 8 seconds. It was good that they ignored us! On our way back to camp we rounded a corner to find a “cool off” station. Water to wash hands, umbrellas for shade - and ice cream, chocolate sauce and sprinkles! Perfect!! Kerry’s journey was courtesy of Ultimate Safaris, Huab Under Cover. 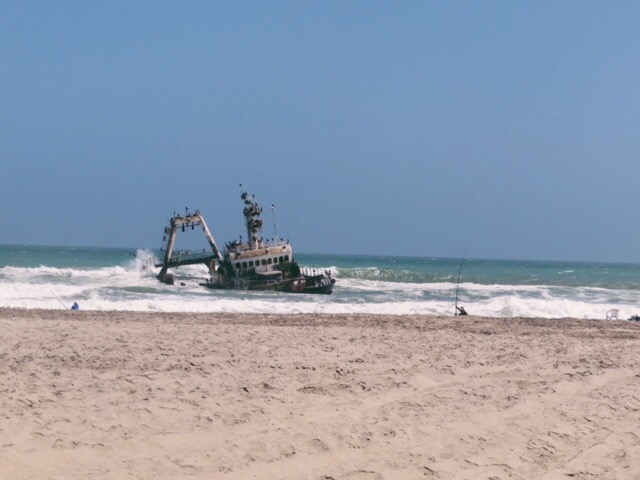 Leaving Damaraland behind we travelled across the coastal desert - tyre tracks the only thing to mark the road. Along the Skeleton Coast - debatable whether named for the skeletons of ships wrecked over the years all along the coast, or the skeletons of the sailors. Even if they make it ashore they were unlikely to survive the desert conditions. Our next stop was the stunning andBeyond Sossusvlei Desert Lodge, about 30 minutes from the gate to the National Park. Just 10 suites with maximum privacy and views to the various colored sands and hills. The pool a welcome respite overlooking a small waterhole. The absolute best feature was the skylights over the beds - this area is a Dark Sky reserve with great star gazing - both with the naked eye and even better through the telescope with the guidance of the resident astronomer.
There must be life of some sort out there somewhere. Earth is nothing in the scale of things!
A fun part of dining at the last few lodges has been the delivery of the evening dinner menu. The first in English and the second in the ‘clicks and pops’ of the Damaraland people. (Think, The Gods Must be Crazy!) This lodge was no exception. The translation for Calamari took around 2 minutes of click speak, various other squeaks and squeals, vigorous arm waving and pacing the dining room.  It’s a very descriptive language. Hilarious!! 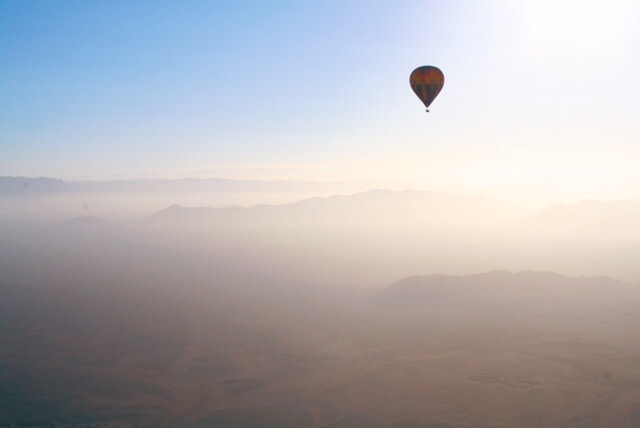 An early start the following morning with a balloon ride along the desert edge. Also, on offer was a walk in the park (not) amongst some of the highest sand dunes in the world and all in the orange sands. Having done this on a previous visit I chose the balloon ride with the champagne breakfast on landing. Up up and away we flew with amazing views of the sunrise and the dunes and over the “fairy circles”. These are all over the desert. Several ideas as to what causes them but no conclusive proof yet. You can adopt one if you like for a donation to conservation.

A big thanks to Ultimate Safaris, Huab Under Cover, andBeyond, World Journeys and everyone who made the journey so incredible.

Kerry is grateful to World Journeys for including her in this incredible famil and to everyone at the camps and on the safaris for the amazing experience.

Contact us us for more information about Namibia and all the African safaris available and we can arrange an itinerary to include one of World Journey's tours. These 'Once in a life time' experiences need to be made with the best.

Below you can find a full slideshow of photos taken by Kerry.